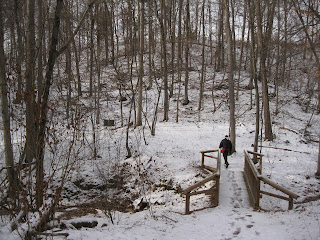 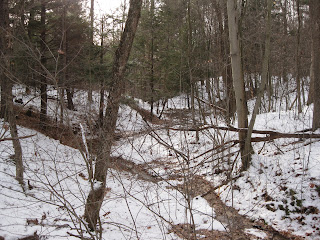 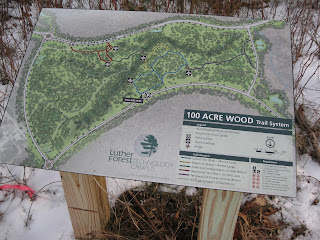 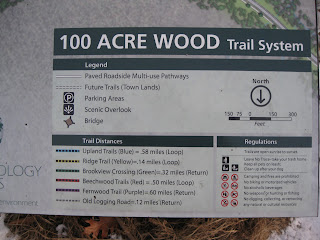 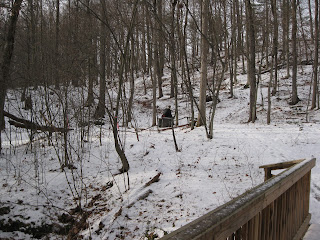 If you feel like a change of scenery, A 100 Acre Woods  is just up the road in the Tech Park.  Trailhead parking turnouts are located on Luther Forest Boulevard or Stonebreak Road.  My husband, Dan, and I got out for an hour or so and walked the trails.  Dan ran through here in the fall and the trails are covered with pine needles for a cushioned walk or run.  The day we visited there was a bit of snow and ice but we just wore hiking boots.  It would be a great spot to snowshoe or cross- country ski.  It is hilly in places and there are spots with bridges and stairs.  Stone benches are scattered throughout.  No Christopher Robin sightings.  Check it out!
Posted by Diane Meade Shapiro at 3:52 PM No comments: 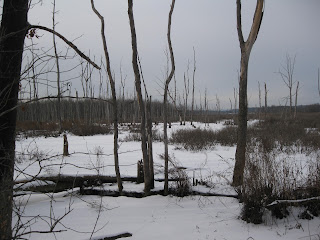 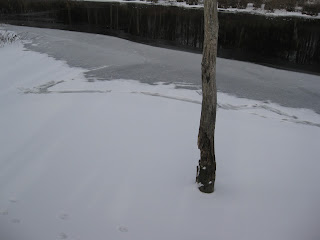 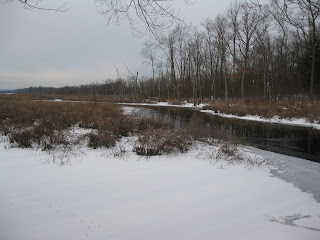 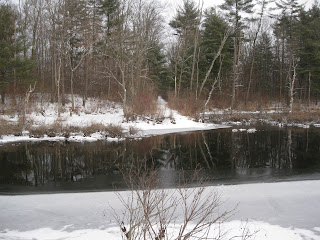 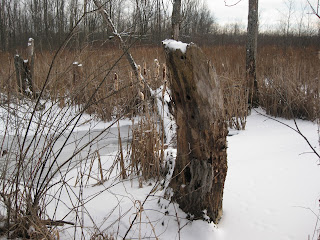 Email ThisBlogThis!Share to TwitterShare to FacebookShare to Pinterest
Labels: 1. Empty Rookery 2. Otter Slides 3. Looking west up the outlet towards Round Lake 4. Where the trolley crossed the outlet, heading towards Sweeney's farm 5. Marsh, south of tracks 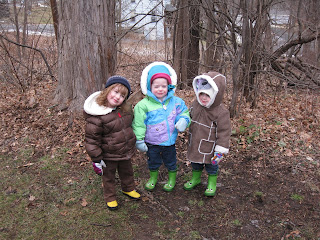 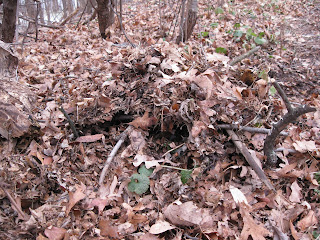 Posted by Diane Meade Shapiro at 2:30 PM No comments:

Email ThisBlogThis!Share to TwitterShare to FacebookShare to Pinterest
Labels: Green Hour Girls. The boys were camera shy. The brushpile we made to shelter wildlife such as mice and rabbits.

Out and About: Round Lake Nature Notes December 2011

It's January first, 2012. Happy New Year! The outdoor thermometer reads fifty degrees and it feels downright balmy outside. In fact, the first day of January is six degrees warmer than the first day of December. There's no snow cover and as I look out over my garden, I notice an ornamental grass has produced new growth. I hope the garlic that I've planted in window boxes doesn't decide to come up. The Wade's Forsythia bushes were flowering at Thanksgiving and into early December. They are spring flowering shrubs. The plants are confused! In my garden, a couple of Goldfinches have been eating the seeds from the dried flower heads of the Rudbeckia and Asters. Lucky for the birds and animals that food and water sources are still available and not buried under a foot of snow or coated with ice. Did you hear the Canada geese having a huge, raucous New Year's Eve party down on the lake? They were honking, flying and carrying on through New Year's Day with a lot of gulls.

Usually by this time of year, one can easily see what's going on in the woods by the tracks in the snow. Without tracks, I've looked for other signs such as scat and the nibbling on plants and twigs to see what animals have been around. A twig of a shrub or sapling tree that has been chewed by a deer has a ragged edge whereas, one nibbled by a rabbit is clean cut. I have seen both kinds of cuts in the woods south of the village. The Red Fox has been out and about in the woods at the end of Peck Avenue marking his territory with scat droppings. I am hoping to catch sight of a turkey flock and some Ruffed Grouse in the area this winter.

In the middle of December I got a call from the Mayor about a hawk, possibly injured, over at the Rigney's house. I went to take a look but could not find it. In talking with Gill and Joe, they told me it was small, not moving, and was by the shrubs close to their bird feeders. I think what they saw was either a Sharp-shinned or Cooper's Hawk. These two hawks come to backyard bird feeders, not for seed or suet, but for small birds. They fly in low and fast. My husband and I saw one come into our yard this summer. It whizzed by quickly and landed in a shrub where it stayed stock still, eyeing the bird feeders. As it flew in all the birds instantly scattered. The hawk stayed for several minutes, hidden in the shrub. We were able to see that it was maybe about a foot tall with a long tail that was straight across the bottom. The end of the tail had a thin white border. With no birds left at the feeders to dine on, the hawk flew off across the park probably to make a dinner attempt in another backyard. I think it was a Sharp-shinned because of its size (about the size of a jay or dove), tail length and markings. The Cooper's hawk is larger like the size of a crow. When perched, its tail is long and curved at the tip. The two hawks are really hard to tell apart. I've seen what may be one or the other several times in the village this past month. Let me know if one visits your feeder and have a yard stick handy!
Posted by Diane Meade Shapiro at 10:02 AM No comments: