Round Lake Night Life is Hopping! 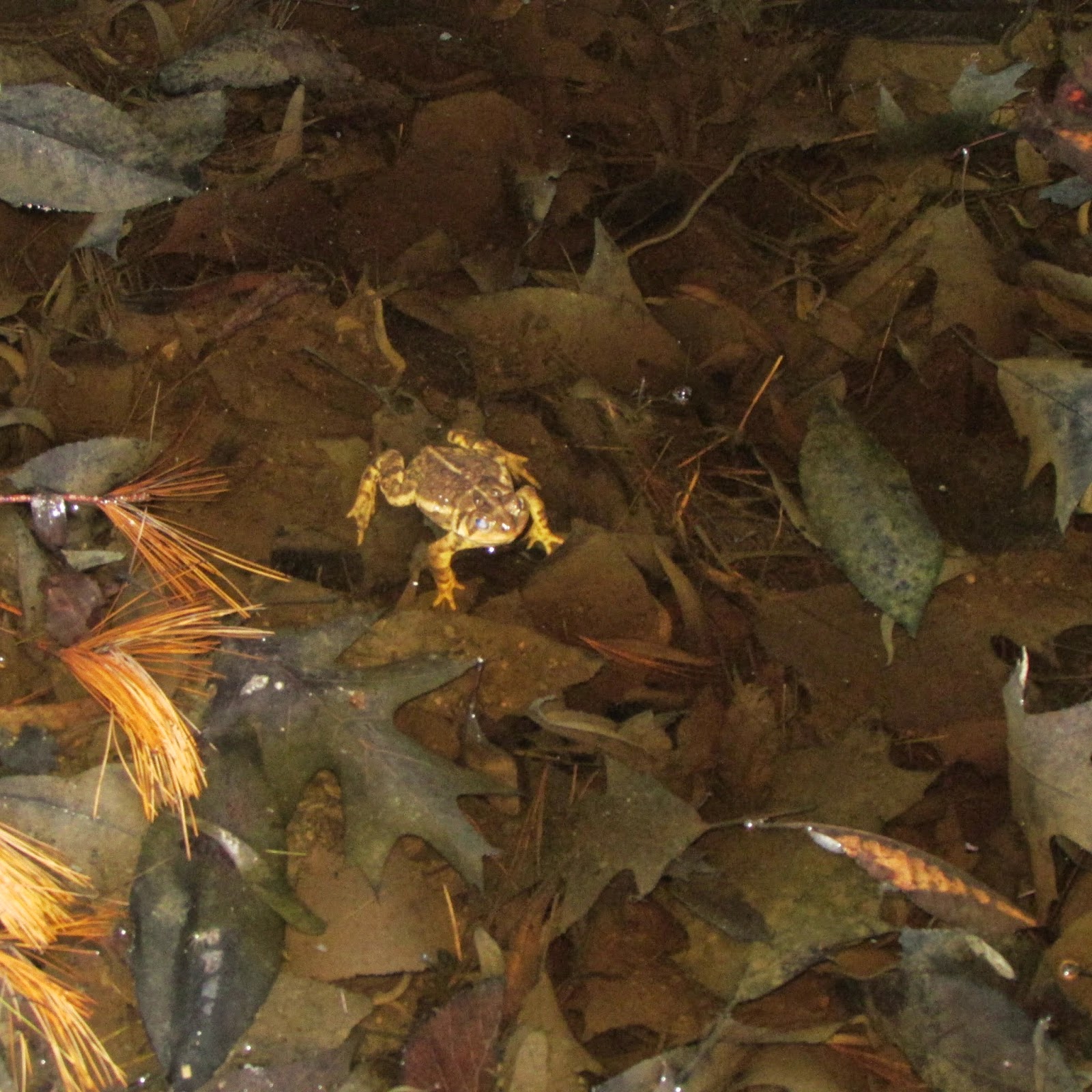 Posted by Diane Meade Shapiro at 2:21 PM No comments:

Out and About: Round Lake Nature Notes April 2014

I think winter has finally relented to spring, although I keep expecting one last snow shower or ice event. I went down to the lake on April tenth to snap a picture of the ice going out. I ended up being there for an hour and a half. As I ran across Route 9, I could see something large sitting on the ice way out across the lake. My binoculars helped me confirm it was a Bald Eagle. It sat on the ice by the edge of open water, doing nothing in particular. Meanwhile, in the choppy water a Common Loon repeatedly dove for fish. A Bufflehead, which is a black and white duck with a rather large head, bobbed along the waves by itself. Fifty or so Common Mergansers took flight, flew around, and splash landed. A Great Blue Heron silently flapped over the water towards the outlet.
I ran home, grabbed another camera, hurried back, and still the eagle presided over the ice. Minutes later, it flew up and was greeted by another adult. They both settled back down on the ice. A juvenile eagle, lacking the white head, flew in and glided along the eastern lake shore. Enter the mergansers, all fifty plus of them. The ducks seemed apprehensive and nervous as they passed the eagles. They flapped their wings, dove under water and splashed around. With all the open water, I wondered why they didn't put more distance between themselves and the eagles. Instead they swam right along the ice and open water edge in close proximity to the two birds of prey.
Suddenly I saw the ducks do an about-face. This time the mergansers seemed calmer, just swimming past the eagles, who were bolt upright paying close attention to the ducks. The scene reminded me of generals reviewing their troops. I found all this very entertaining and took way too many pictures. I have several on my blog. Finally I pulled myself away from the lake. Ice went out completely probably in the early hours of April twelfth. It was later than the last two years. In 2012 Ice-Out was March fourth and in 2013 it happened on March fifteenth.
On April twelfth temperatures were in the seventies and the warmth lingered through the evening. Dan came in that night from dog walking and said I had to come outside and see something. We walked up to South Lawn where the party was hopping... in the puddles that is. The frogs were extremely loud and very active.  They leaped over and onto one another, while puffing out their throats and trilling. It was really riveting-haha! Judy Selig was at the same location a little later enjoying the frog chorus and in addition, heard the peenting sound of an American Woodcock bird. Dan and I heard one a week or so earlier further down the Zim Smith trail. Woodcocks are very hard to see as their coloration matches the leaf litter on the forest floor where they search for earthworms. At dawn and dusk in spring, males make a loud peent sound with a spiraling aerial display, twittering sounds and a steep dive back to the ground all to attract a female. Dan and I saw the bird flying around in the dark but trees prevented us from getting a good look at exactly what it was doing.
So now you know that Round Lake night life is hopping and/or flighty depending on what you see when you're out and about. Happy Spring everyone!

Posted by Diane Meade Shapiro at 2:14 PM No comments: 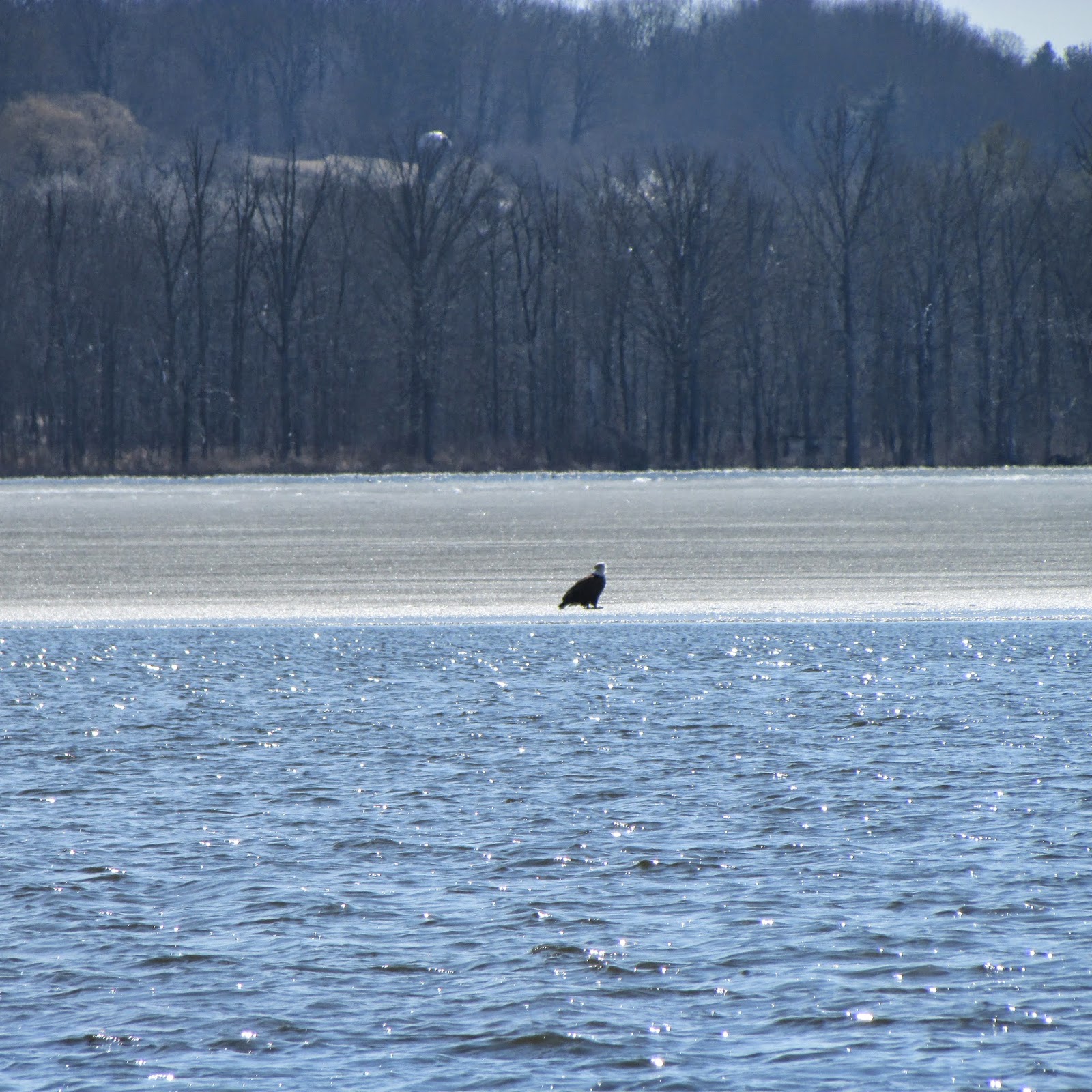 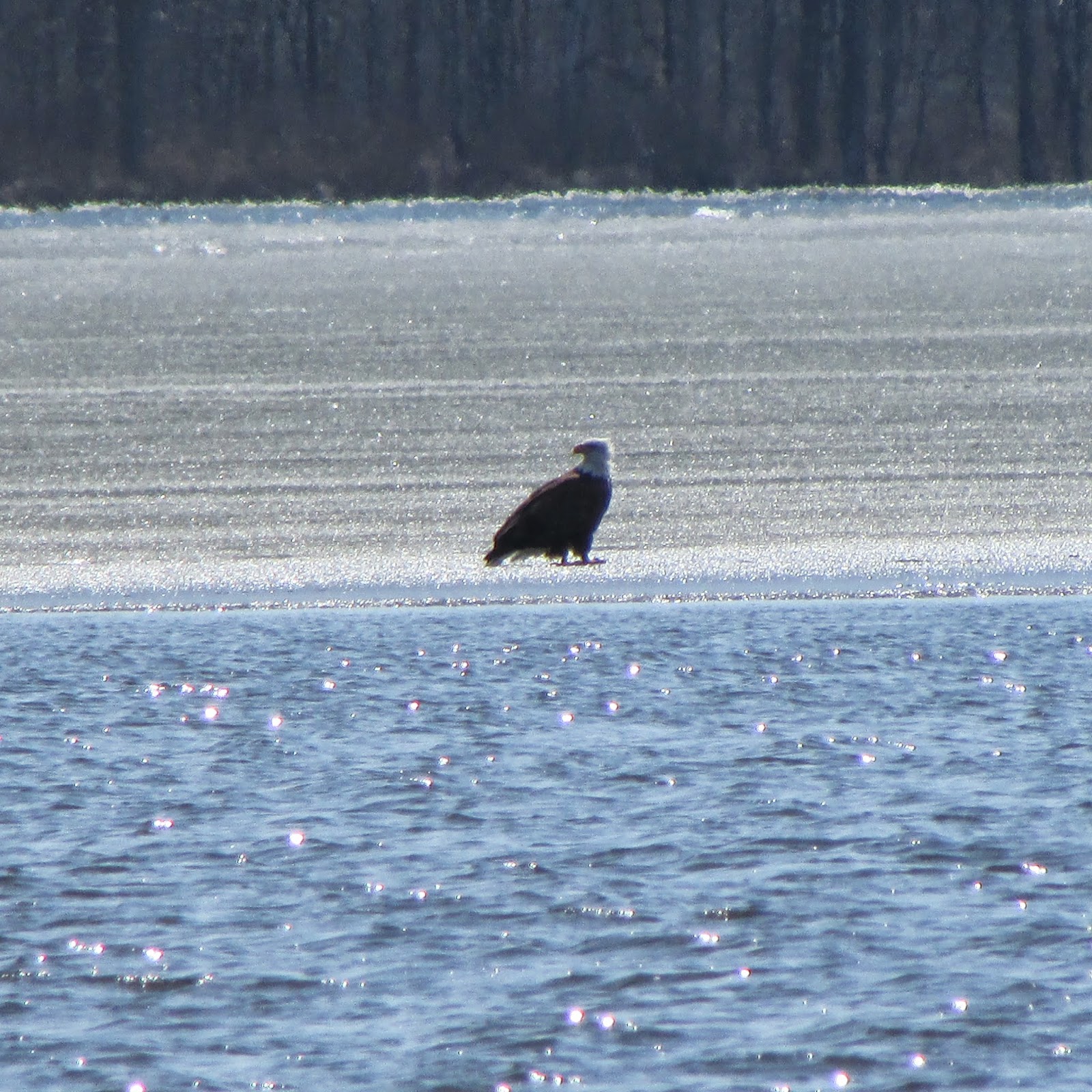 Posted by Diane Meade Shapiro at 10:31 AM No comments:

So Happy to See Color in my Garden!


Posted by Diane Meade Shapiro at 11:18 AM No comments:


Posted by Diane Meade Shapiro at 2:59 PM No comments:

Round Lake Nature Notes: Out and About Winter 2014

Out and about this winter, Great-horned Owls have been heard hooting it up around the village all night long and sometimes, even through the wee hours of the morning. Very vocal owls have been reported from Washington Avenue to Goldfoot Road, up on Mount Morris, around the Auditorium, and over on Simpson and Saratoga Avenues. Thanks to all who told me when, where, and whooo it was by imitating its call. One cold, clear night my husband came in from walking the dogs and said the owl was on Mount Morris. I ran over to listen. It hooted every fifteen seconds. It did this for over an hour, not that I stood outside listening for that long. Walking back to my house by the children's playground, I realized I could still hear it. I compulsively went out on my porch every five to ten minutes listening for it until it stopped. The next day I went over to look under and up in the trees on Mount Morris which sits between Covel and George Avenues. A towering White Pine had a lot of whitewash on its trunk. Both my dog and I discovered a couple of owl pellets under the tree - a roost! I would have examined the pellets more closely but Athos was too interested in them. Unfortunately, the next day they were covered with a foot of snow.
The winter hooting is usually about owls defending their territory before egg laying. They hoot a lot again in the fall when their young leave the area. Down the Zim Smith trail, about a quarter mile from South Lawn, a Barred Owl keeps its distance from the Great-horned. Wisely so, as its the Barred Owl's main predator. I've seen the Barred several times this winter, roosting along the trail or in the woods. One afternoon it startled me and Athos with its "Who Cooks For You-Who Cooks For You ALLLLLLL." As loud as it was, I couldn't locate it. Another day I came across it roosting in a tree thirty feet off the trail. It was camouflaged perfectly against the tree's bark. I saw it at 9:30 in the morning and again at noon and 4pm. It didn't seem to move a bit throughout the day. By noon it was bathed in sunlight and still was at four o'clock. A perfect perch on a cold winter's day. . . .  I haven't seen or heard it in a couple of weeks even though I take my life in my hands, slipping and sliding on the icy trail looking for it.
A couple of weeks ago, at the end of Peck Avenue, I saw what looked like a super-sized crow being mobbed by smaller crows. Then it opened its mouth and gave a Croak and I knew it was a Raven. Later, after a village meeting, Scott Rigney showed me a picture on his phone of a Raven he saw in the woods between his house and the ball field. There were two of them. A couple of other villagers had also seen one. Scott mentioned that he heard Sue Northrup's mom had Ravens at her house on Goldfoot Road. I was able to speak to Sue who told me that her mom would put out food for them and one would come in and then be joined by several more. They would hang out in the wooded area between Goldfoot and Morris Roads.  Having not seen Ravens before in town, maybe they're venturing out and about a bit more.
There have been lots of Bald Eagle sightings recently. They are probably waiting for ice-out so they can fish. Jean Sweet almost had an eagle as a hood ornament. After chatting on Janes Avenue, Jean started driving and I saw her brake quickly. An eagle had flown down from Prospect Avenue low over her van - only twenty feet above my head. I could see it picture perfectly! It circled over Schoolhouse Park several times before flying back toward the lake.  Happy Spring?!

Posted by Diane Meade Shapiro at 2:44 PM No comments:

Passenger Pigeon Flock in the Children's Room at the Library

Passenger Pigeons flew in huge flocks of billions of birds. They darkened the sky with their numbers and took days to pass by. They were massively over hunted and also lost habitat during the eighteen hundreds. The Passenger Pigeon became extinct in 1914. The Fold The Flock project commemorates the pigeon's extinction by making origami pigeons. Jen Finkle and I did a program at the Round Lake Library explaining their demise and then, with program participants, folded a flock. The pigeons are flying in the Children's Room, darkening the window. Go to foldtheflock.org for more information. 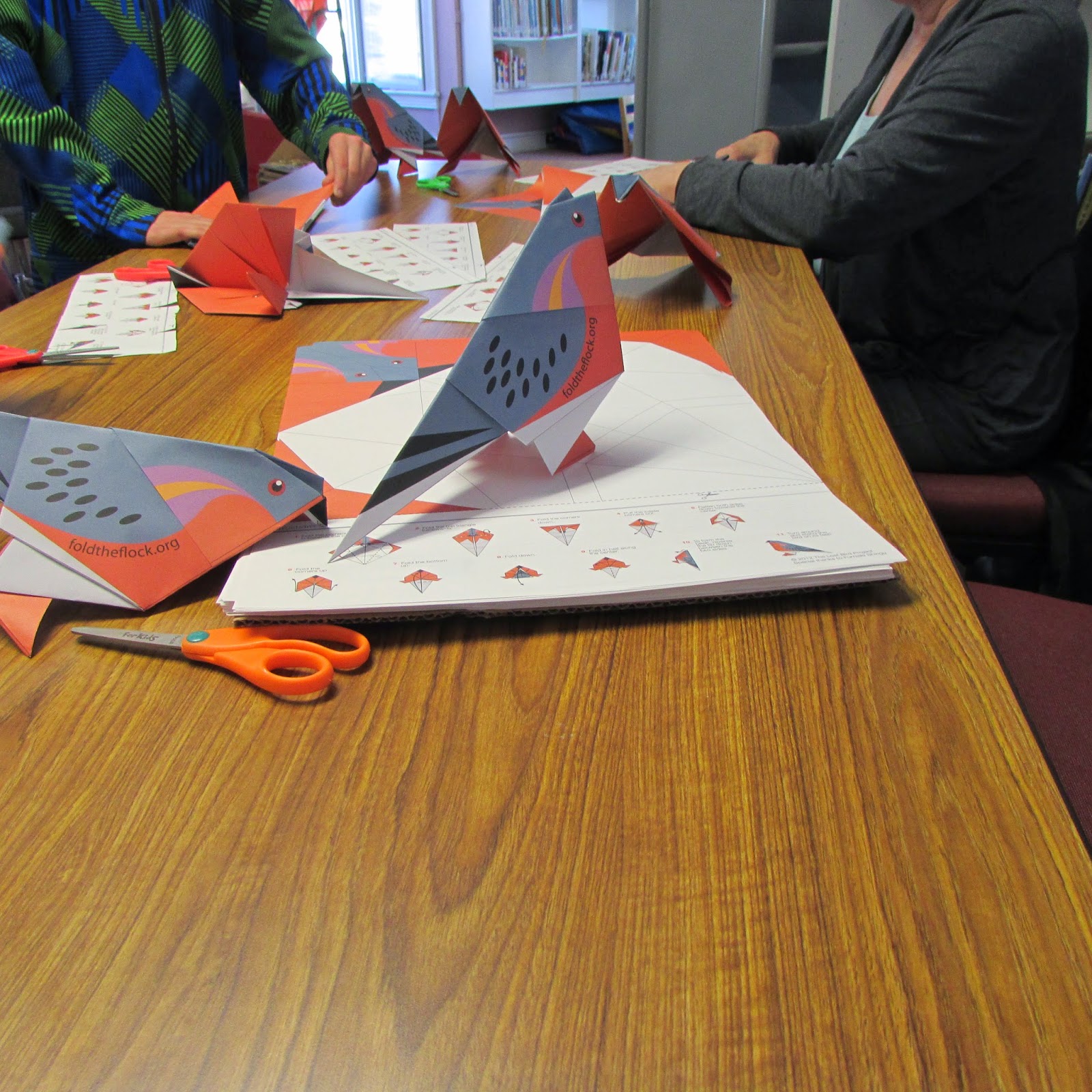 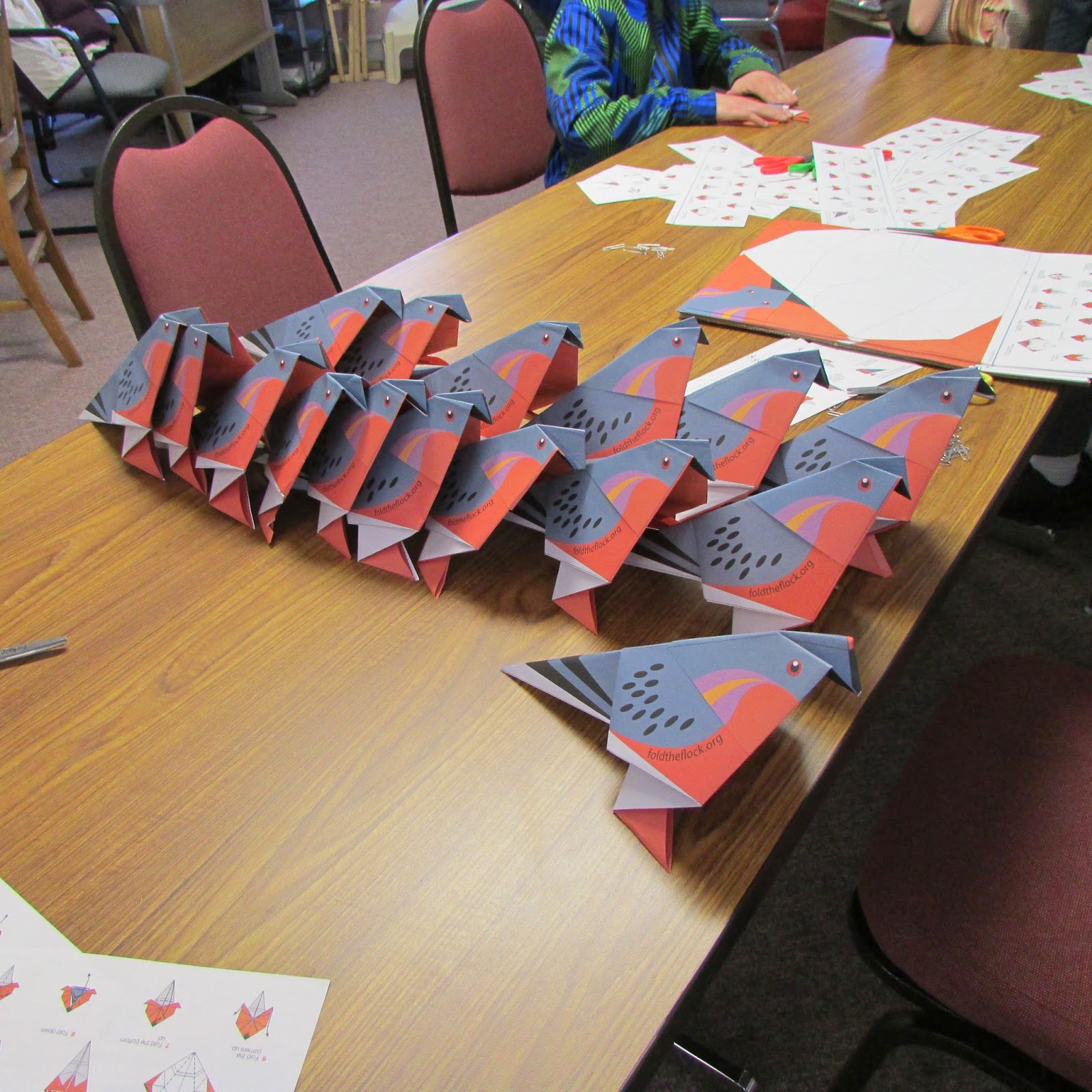 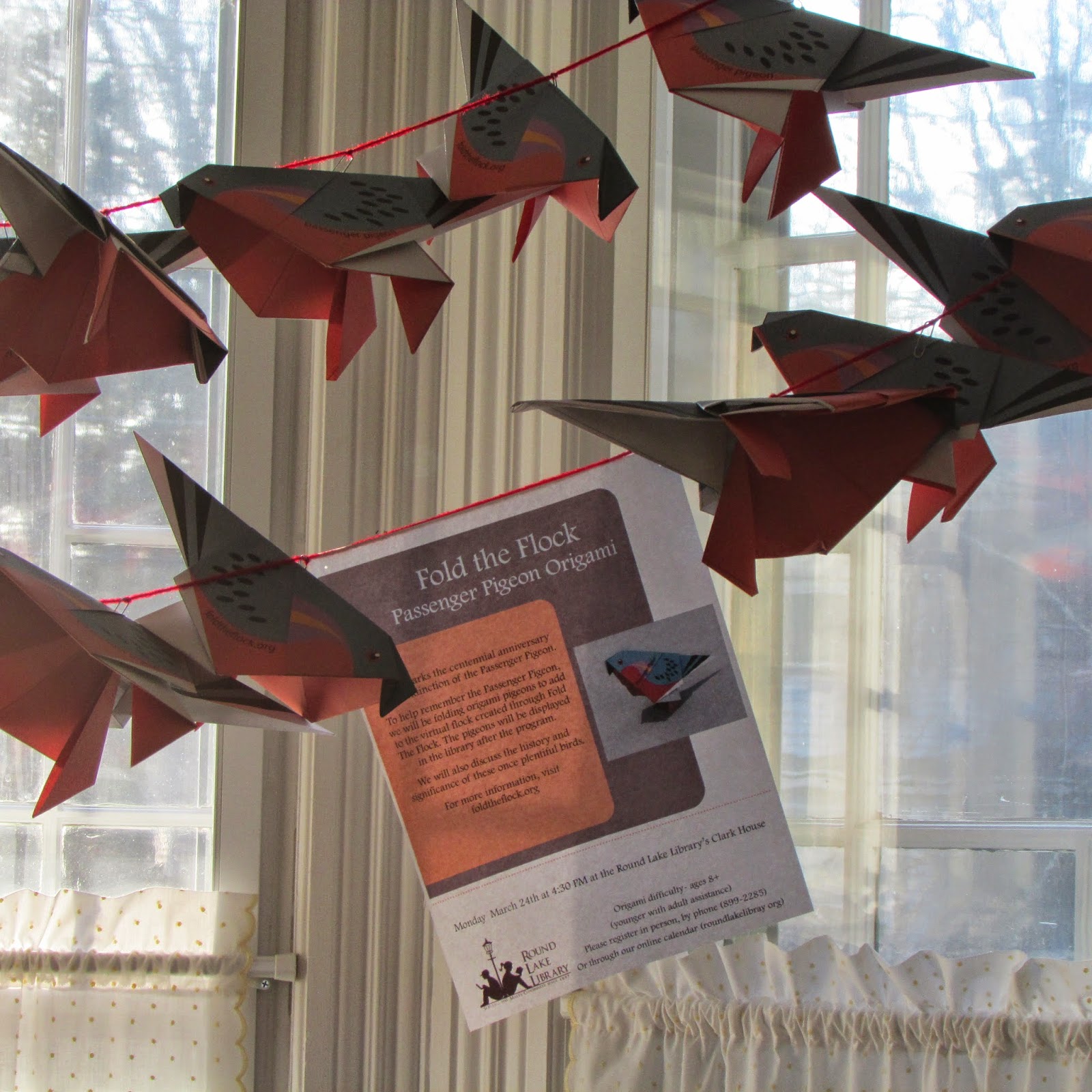 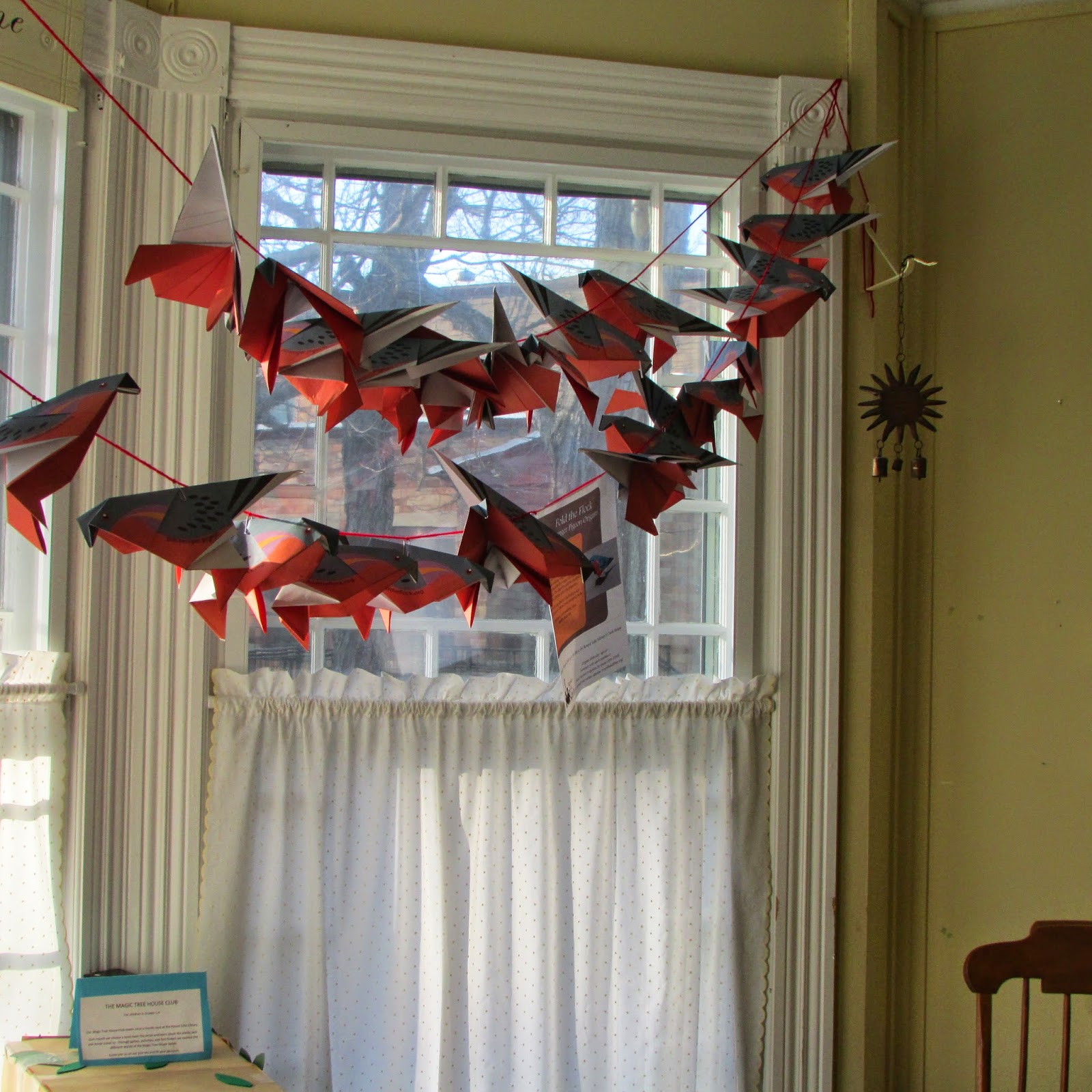 Posted by Diane Meade Shapiro at 2:37 PM No comments: