Around Town in February

The last day of February finds us being treated to yet more bone chilling temperatures. More snow is in the forecast for Sunday night into Monday morning. I swear I heard the groundhog snoring under my garden shed when I went out there to grab some potting soil. Let's give it a couple more weeks and then, perhaps, we'll see a sign of spring! The following are pictures Out and About Round Lake.

A trolley ran along the south side of Round Lake years ago. There was also a trolley station near the lake's shore. The line can only be accessed from private property now. Luckily, I have friends who live adjacent to the line. After the February thirteenth snow storm, we got out for some snowshoeing. Not much in the way of wildlife was out and about. We saw some deer tracks and a Carolina wren.


Posted by Diane Meade Shapiro at 3:45 PM No comments:

It was snowing all day on February fifth. My bird feeders were filled and I was counting birds for Project Feeder Watch. Cardinals, House and Gold Finches, European Starlings, and several Cowbirds were crowded onto the feeders.  White-throated and American Tree Sparrows, along with Dark-eyed Juncos, were hopping around the ground under the feeders and through the garden foraging for seeds. I got the idea to sprinkle some sunflower seeds on the porch. I thought some ground feeding birds might appreciate the sheltered dining spot. It didn't take long for the Dark-eyed Juncos to find the offering. They didn't even mind my dogs intently watching them and every so often, barking and jumping at the glass-paned door.


Posted by Diane Meade Shapiro at 4:45 PM No comments: 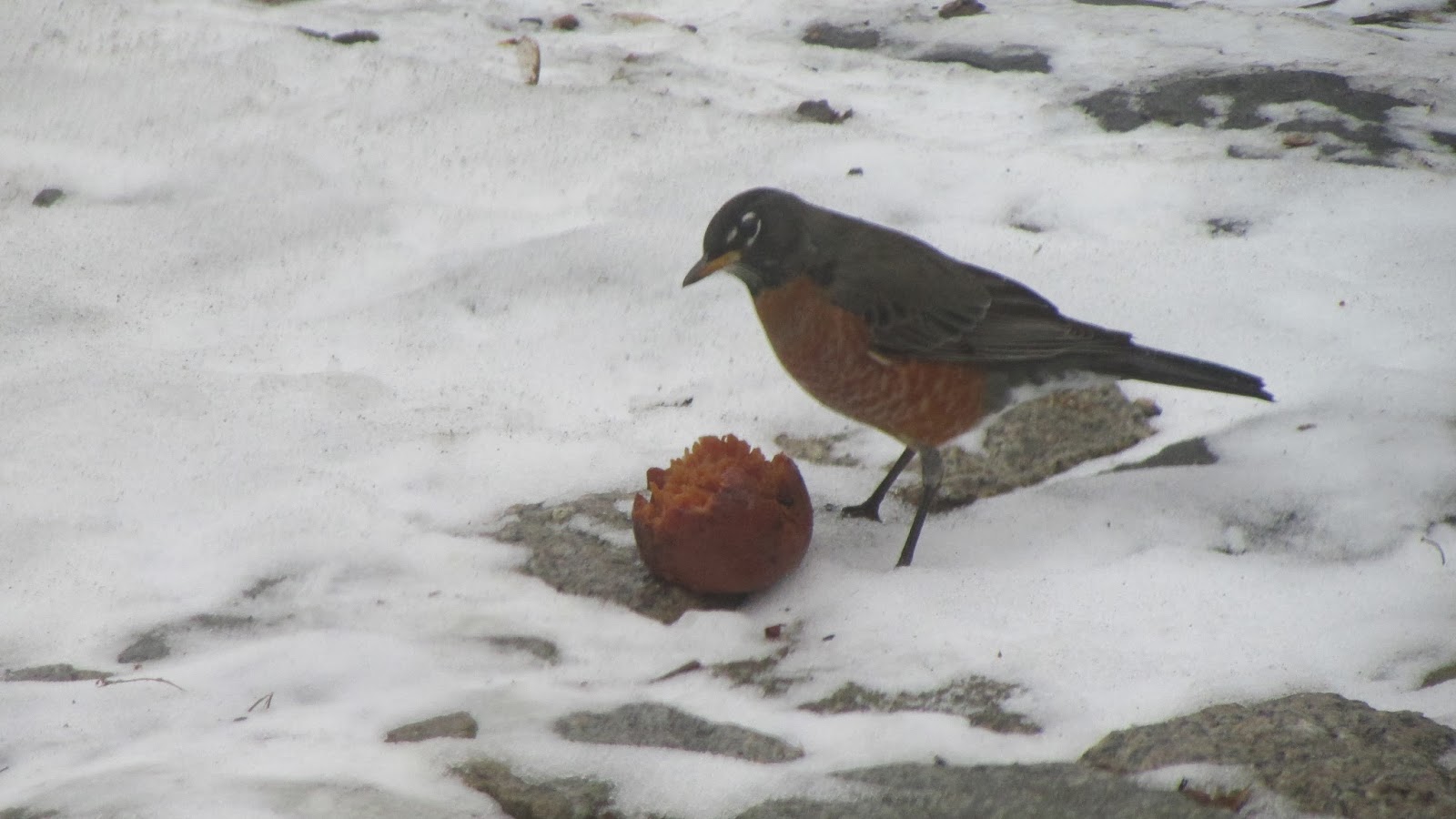 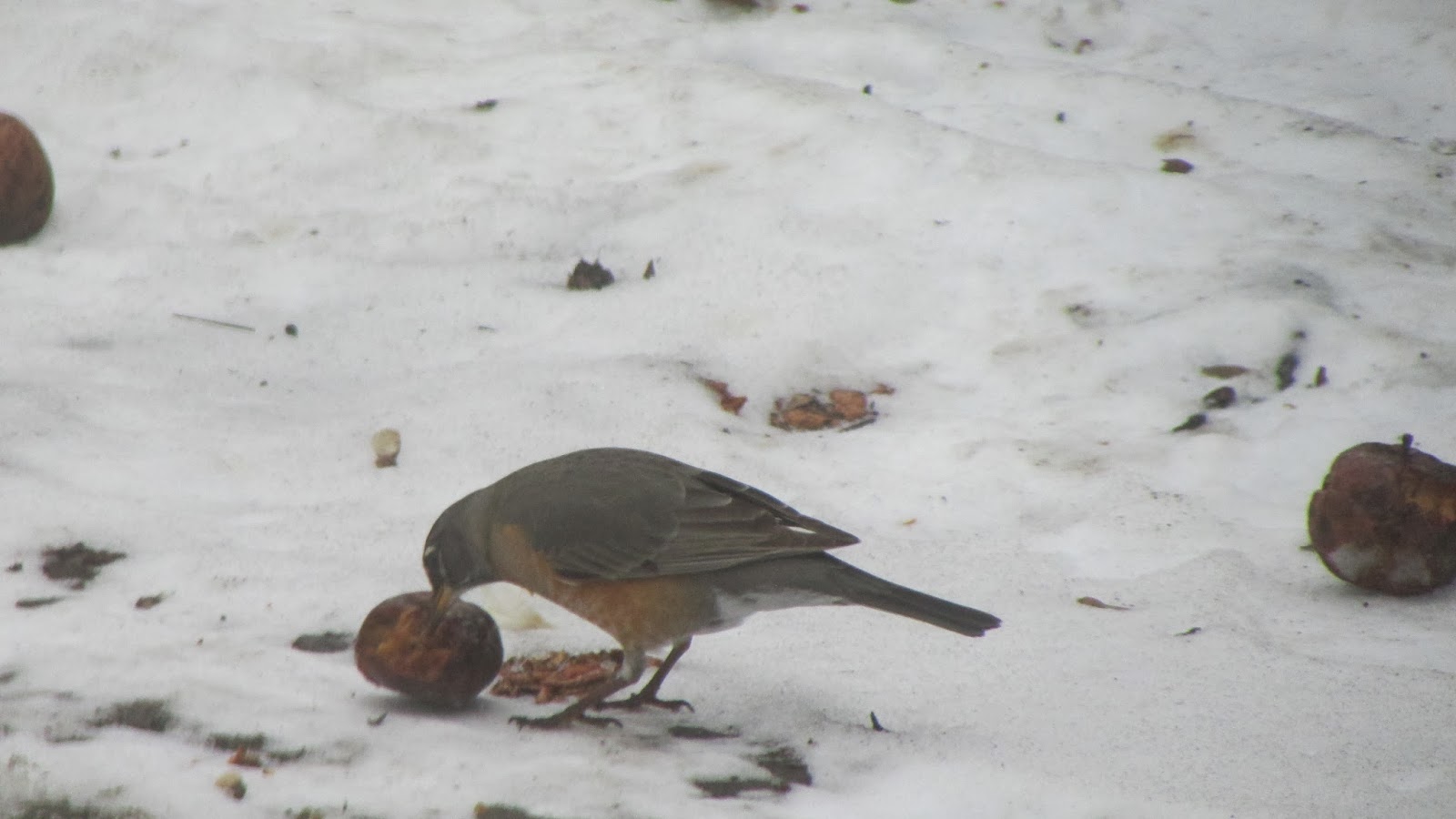 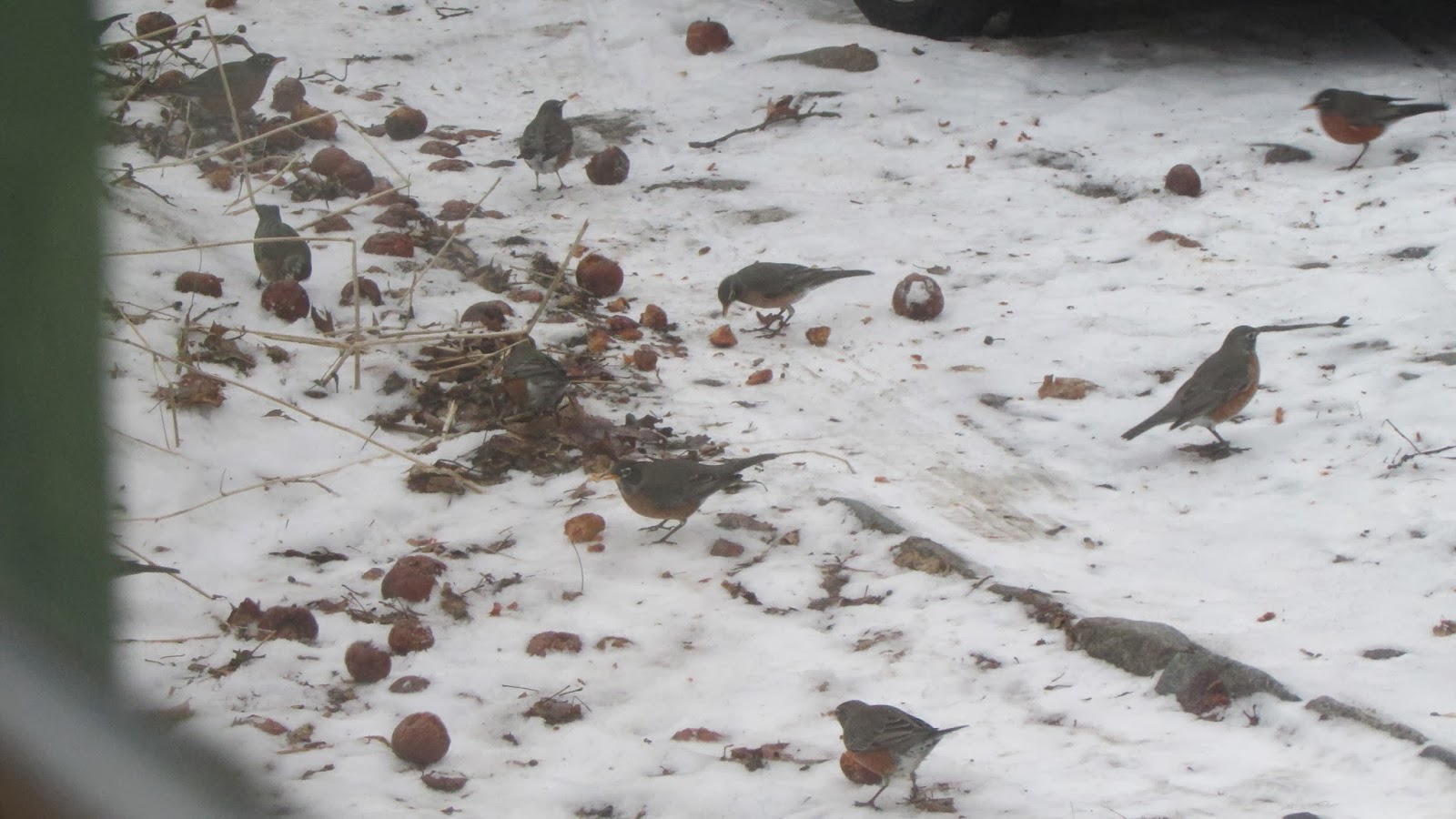 Large flocks of robins have been around all winter here in Round Lake. In past years, I usually see a few on the trail south of the village hanging out with bluebirds. They like eating the staghorn sumac which is along the trail's edge. In February of 2008 I counted thirty-six robins on and near an apple tree by the Crandall farm. They were eating the old fruit. I was doing the Great Backyard Bird Count and remember being excited for that high count. This autumn we had a bumper crop of apples and crab apples. The robins have taken advantage of this great food source. They can be seen busy devouring fruit still left on trees and that which has fallen on the ground. I've watched them descend on a tree, finish off the fruit in a day or two and then move on to another. Sometimes there are Cedar waxwings and bluebirds along with them. Robins are known to gorge on fermented apples to the point of becoming tipsy. When a flock arrived on my trees and driveway I looked closely to see how they were behaving. All birds seemed to be under control. No rockin' robins!!
Posted by Diane Meade Shapiro at 2:00 PM No comments:

Round Lake Wood Chuck is a No-Show

He moved in under the garden shed in September. I haven't seen him since. A cute cottontail might be under there with him. I saw her hopping around the yard last week. She left her tracks and an Indian corn cob by Chuck's back door. I waited all day today to see him. It was cloudy. Nothing had a shadow. Punxsutawney Phil saw his shadow. Obviously there was sunshine in Pennsylvania. The big game is drawing near. Maybe Chuck's annoyed that he's sharing the limelight with the Broncos and Seahawks. I went out and toasted Chuck with a nice bottle of Woodchuck Hard Cider. I asked him to go easy on the parsley when he shows himself in six weeks.

Posted by Diane Meade Shapiro at 2:16 PM No comments:

Round Lake Nature Notes: Out and About Autumn/ Early Winter 2013... If I Could Control the Weather

Take a moment and think back to Autumn. My nature notes indicate mostly sunny days, temperatures in the sixties and seventies, cooler nights in the forties and beautiful fall color. Garden vegetables, like peppers and cherry tomatoes, were still happily growing.  In mid-October some of the tomato plants were continuing to crank out flowers. Asters and goldenrods, along roadsides and in gardens, were covered with bees and other insects.  Annual flowers including zinnias, impatiens, fuchsias, and cosmos continued to blossom without a frost to cause their demise. Apple trees were laden with fruit, their branches straining and breaking with the heavy yield. Dan and I dried the apples from our trees, made pies and crisps and even apple wine. With fewer garden chores to do, I got to sit a bit in the yard and enjoy these lovely days. I watched for Monarch butterflies but only saw six for the entire season. The last one I spotted was on October twenty-first. Their numbers are way down. Time will tell how they are doing when they are counted at their wintering site in Mexico.
If I could control the weather this past autumn's is the kind I would select. Everyone who I saw out and about was happy and content but...     BAM! We knew it was going to change and as always it did. On October twenty-second daytime temperatures began dropping into the forties while nights hovered in the upper thirties. It was a downward spiral until finally a hard frost occurred on the twenty-ninth, sixteen days later than 2012. I put away the gardening tools and brought out the snow shovels.
We didn't get snow in 2012 until the day after Christmas. This year we had a couple of dustings and then a snowfall before Thanksgiving. A mid-December storm dropped a foot of snow and was followed by frigid temperatures and it technically wasn't winter yet. In early January there was a repeat performance of over a foot of snow coupled with below zero temperatures. The January snow was lovely, light, and powdery. I got out snowshoeing between shoveling and huddling by the fire. Check my blog, Roundlakenaturenotes.blogspot.com for pictures. You'll also see photos of birds visiting my feeders during this harsh weather.
What has helped me stave off premature cabin fever (It's still only January?!) is looking at gardening books, watching birds at my feeders, visiting Leah's Cakery for treats and Nathaniel's delicious soups, and seeing Hair of the Dog, an awesome Celtic rock band with our very own Brian Gibney, guitarist, at the Parting Glass. I hope you are all coping with the polar vortex and staying warm. Spring in two months, hopefully!

Posted by Diane Meade Shapiro at 11:16 AM No comments: