A Dead Garter Snake In The Woods 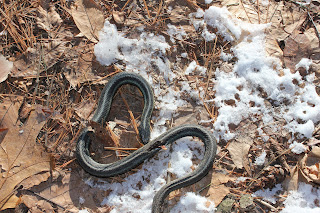 I have been looking up a lot while walking in the woods this winter.  That's because I have been lucky enough to see the Barred Owl several times.  While the dogs are sniffing and romping  I check out the top branches of the white pines to see if the owl is tucked in for a day time nap.  So I was very surprised on the morning of January eighteenth when I glanced down on the trail and just about stepped on a snake.  What?  A snake in winter, out on the trail, in snow and cold temperatures?  I immediately looked up to see if a hawk or owl was perched above me ready to attack my head for being between it and its scaly meal.  Nothing.  I took a closer look at the snake and it was certainly dead.  I noted a rip in its skin with some guts hanging out.  Had it been bitten by a bird of prey, roughed up by a Red Fox?  As my morning coffee kicked in I thought of what might have happened.  A couple of days prior to the eighteenth, much of the snow cover had melted.  The stream which cuts through the trail was running high and by passed an old cistern.  The flow of water made the trail impassable.  It also churned up a lot of leaf litter and organic matter.  Was the snake holed up in the stream's bank or the old cistern and flooded out?  Had it then been discovered by the fox whose tracks can be seen crisscrossing the woods and stream in this area?  Or was the snake spotted and snatched up in the talons of the Barred Owl or Red-tailed Hawk?  Why not devoured?  Maybe it's because without  snow cover mice were easier to see and catch and are a preferred meal?  Drop the snake and grab a mouse!  After a couple of days,  the snake was flipped over and off the trail by a foot or so.  Hhmm...  Then it snowed.  What will be nature's next move?
Posted by Diane Meade Shapiro at 12:41 PM No comments:

Posted by Diane Meade Shapiro at 6:53 PM No comments: 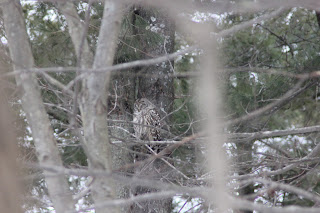 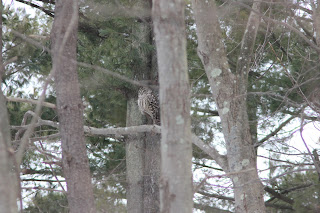 Out and About: Round Lake Nature Notes January 2013

Happy New Year everyone!  New for 2013 is SNOW and lots of it.  Remember last year, our first major snowstorm held off until February twenty-ninth.  This past Christmas morning a light dusting of snow made the holiday a white one and didn't interfere with travel plans.  Two days later, we were digging out after a generous snowfall.  Perfect timing!  The sled riding hill was in full swing, new sleds, snowboards, and winter clothing all could be tried out.  Cookie calories were burned off by snow shoveling.  Two days later, more snow again.  Winter was here.
On Christmas morning the first present I received was a beautiful glass bird ornament I found hanging from my bird feeder pole.  It was a wonderful surprise.  A few days later I found out it was the Sweets who were playing Santa.  The second gift was from Mother Nature.  After finding the ornament, I walked down by the lake with my dog and saw two Bald Eagles flying and swooping above the water.  Awesome!  On Christmas Eve day, Jeff Finkle took a kayak paddle on the lake and saw the pair.  Judy Selig saw the eagles doing  aerial acrobatics on the thirtieth of December above the Village.  Stew and Julie- keep looking up!
Woodpeckers have been drawn to people's suet feeders, including the large Pileated Woodpeckers.  Carol Luse has been excited to have a juvenile Pileated at her feeder while I have had the adults.  I was lucky enough to have them visit on the day I was doing a bird count.  I submitted my observations to E-bird, an on-line checklist program that collects observations and tracks bird abundance and distribution.  If you are out for a walk, a spot with a lot of bird activity is towards  the end of Andrews and Peck Avenues.  Woodpeckers, White-breasted and Red-breasted Nuthatches, Dark-eyed Juncos, House and American Tree Sparrows, Black-capped Chickadees and Northern Cardinals flit between the woods, shrubs and yard feeders.  Go take a look!
I have been keeping my eyes open for another Barred Owl sighting on the Zim Smith trail south of the Village.  On an early morning walk at the end of November, I looked into the woods just before the 3.0 miler marker and saw a beautiful Barred Owl staring at me.  It was sitting on top of a small dead tree, fifteen feet off the ground and about ten feet from the trail.  I kept my distance and watched it for a few minutes.  It eventually broke the staring contest, turned its head and looked in the opposite direction.  I told the three-four year old participants in my Green Hour about the sighting.  I explained that people describe the sound these owls make as "Who cooks for you"?  Zachary immediately piped up, "Daddy"!  When I asked them if owls are up during the day, Kate, who is three, replied, "No they're nocturnal like Mommy."  The adults were all impressed with Kate's accurate use of the word nocturnal. (Kate's dad had explained to her that her mom, who works nights at the hospital, is nocturnal).  Good job Kate!  In the fall, the children made a small brush pile at the edge of Schoolhouse Park.  Brush piles are used by wildlife to take shelter on really cold days and nights, as well as a retreat from predators.  We will be using our track booklets to see if we have had any visitors at the pile.  My blog, Roundlakenaturenotes.blogspot.com has a few pictures of our snow covered brush pile.
Hope to see you out and about.  Don't forget to look up- you never know what you might see!

Posted by Diane Meade Shapiro at 6:33 PM No comments: