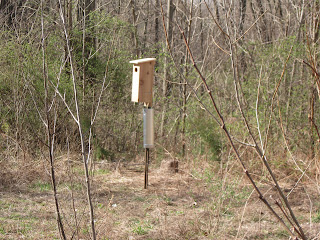 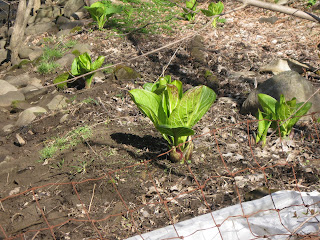 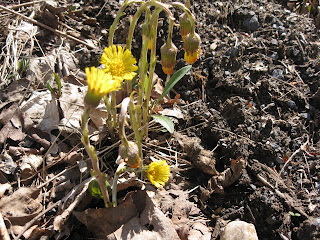 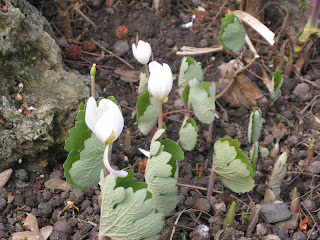 Posted by Diane Meade Shapiro at 1:50 PM No comments:

Out and About: Round Lake Nature Notes March 2012

During the month of March, temperatures took a roller coaster ride.  They plunged down, up and through several seasons.  The first of March brought temperatures in the thirties and a storm that dropped nine inches of snow on the ground.  A couple of days later, temperatures rose into the fifties and melted the snow as well as the ice on the lake.  Ice-out occurred on March fourth, a full month earlier than last year.  By March twelfth, we enjoyed a 68 degree day.  Winter careened into spring.  In village gardens, snowdrop flowers and crocuses bloomed, tulips, daffodils, and squills broke ground.  Coltsfoot, an early, small, yellow wildflower, appeared while skunk cabbage popped up in wet areas along streams and woods.  Spring peeper frogs raised their voices as did tree and bull frogs.
Summer knocked spring off its tracks by the third week of March.  On the eighteenth, a seventy-three degree day lured a group of us out on the lake for a first paddle of the season.  Down on the water, Tree Swallows swooped after insects.  Red-winged Blackbirds sang " Konk-la reeee."  A turtle basked in the sunshine.  By the twenty-second, mosquitoes were out in full force.  Butterflies that wintered over fluttered around as temperatures went above eighty degrees.  Crocuses wilted in the heat.  We wore shorts and reminded ourselves it was only March.
BAM!  By month's end there were freezing temperatures at night and it only got into the upper forties or low fifties during the day.  The wild ride was over.  What will April bring?  Hopefully, not the "S" word.
In 2011, I saw Wood Ducks back in the village on the last day of March.  This year on March nineteenth I spotted a pair in Schoolhouse Park.  They select a tree cavity for nesting and will also use nest boxes.  You may remember that last year I wrote about the babies jumping out of a tree cavity during the Antique Festival.  They landed in Rowe Park among antiques and people.  The mother's next move was to lead her ducklings to water.  Due to all the activity, some of the ducklings got separated from their mother.
This year, thanks to funding from W.R.L.I.S. and permission from the Village, the Wood Ducks will have a couple of safer choices in the way of newly constructed nest boxes. My husband made them following the Wood Duck Society's plan.  They include a baffle to keep predators out such as raccoons and squirrels.  Dan even etched a ladder on the inside of the box so the ducklings can climb out.  Placement requirements are a bit tricky.  The boxes need to be put in a quiet place, eight feet from a tree, eleven feet from an overhanging branch, with a clear flight path into the box  for the mother.  They should be located near water and an insect dense area.  Wow!  Lots of requirements.  Meanwhile, the ducks in Schoolhouse Park have been looking at tree cavities right next to nesting squirrels and starlings.  Noooo!  Pick a nest box.  I will keep you updated on their choice.
Thanks to Dave Matthews who had a turkey sighting on March twenty-eighth on the north side of Schoolhouse Park.  He counted eight turkeys.  I have submitted the count to DEC for their turkey flock survey.  Enjoy whatever season it is!!


Posted by Diane Meade Shapiro at 1:34 PM No comments: