Red Admiral Butterflies on the Lilacs 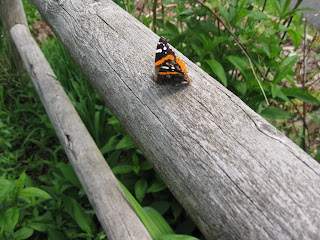 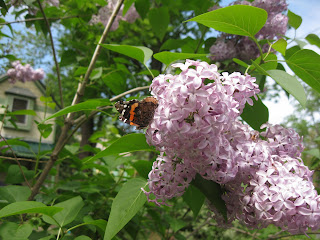 Out and About Round Lake Nature Notes April 2012 Did You Know...

Did you know that if a wild bird enters your home, it's helpful to have a net laundry bag handy to catch it?  The bag is soft, light, and see-through.  When popping it over the bird, you can see where the bird is and how to handle it.  This is what was used to catch a female House Finch one evening early in April at Mary Jo Lanahan's house.  Mary Jo had made many attempts to get the bird outside before calling me.  She wondered if I had any ideas.  I went right over to take a look.  Front and back doors were open but the frantic finch was flying toward the skylight, top of the fridge and high shelves.  Mary Jo pointed out that she had a net laundry bag.  It took a few tries but I finally caught up with the bird and covered it with the bag.  It worked better than a towel because I could see the bird.  Out to the front porch we went and the little bird flew off.  However, as she had built a nest in the corner of the porch, she was soon back.  It's the last day of April and she's still on the nest.  Mary Jo reported the male has been around a few times too.  No babies yet.
Did you know that if you leave hanging baskets up, filled with soil but without flowers, you may be providing real estate for nesting birds?  A Mourning Dove claimed a basket on a neighbor's porch.  On yet another porch, paper lanterns were an attractive nest site.  Robins seem to like building nests where the power lines come into the house.  Don't leave your shoes or boots outside.  You might be surprised by something that's crept into them overnight!  If you see the Wood Ducks flying around or perched in a tree, let them know there's a couple of  nest boxes available.  Move-in condition and each lined with cedar shavings. . . .
Did you know that you can make a nose out of a maple seed pod?  Also known as helicopters, pollynoses and whirlybirds, you first crack the pod in half, then take the thicker end and split it open.  Take the seed out and then press the pod on your nose.  A sticky substance in the pod will glue it on for a few seconds.  So how many of you have ever done this?  There's a bizillion pods around right now so give it a whirl!  Speaking of "whirl," it's also fun to throw the seed pods up in the air and watch them spiral down to the ground.
Did you know that it takes ten quarts of dandelion flowers and fifteen pounds of sugar to make five gallons of dandelion wine?  Dan has been out and about collecting flowers which then have to be pulled apart before used in the recipe.  Dan's yellow fingers are the talk of his co-workers.  The wine won't be ready until next spring.  We hope it's worth the wait
Did you know that garlic mustard is listed as an invasive plant in New York State?  It chokes out native wildflowers and is not a good food source for local wildlife. Since it's everywhere, I know that you've seen it.  The leaves are green, heart-shaped and toothed.  If you crush the leaves they give off a garlicky smell and are edible for humans.  The flowers are small and white.  Each plant produces hundreds of seeds.  As soon as I see it coming up in my yard and garden, I hand pull it out, making sure I get all the roots and throw it in the garbage.   I have been able to control it this way.  While in the woods, if I spy it around some of my favorite wildflowers, such as Bloodroot, Jack in the Pulpit and Trillium, I pull it up.  You can also cut it down close to the soil surface just as flowering begins.  It is flowering now.  Go get it!
Posted by Diane Meade Shapiro at 3:17 PM No comments: