Out and About: The Blizzard of 2017 STELLA

It has been two weeks since a blizzard, named Stella, dumped over twenty inches of snow down on us. The date was March fourteenth. The storm lasted about twenty-four hours and at times, was coming down at the rate of three to four inches an hour. The wind whipped the snow everywhere creating drifts and whiteout conditions. Everything was closed and we were told to stay off the roads because plows couldn't keep up with the storm. I managed to take a few pictures outside but it was warmer and much drier in the house. I had a record number of American Tree Sparrows on the ground, in my yard, trying to eat sunflower seeds before the seeds got buried. They and Dark-eyed Juncos resorted to eating seeds from garden plants which were above the snow drifts. It seemed that the same four starlings ate an entire suet cake while the storm raged. Temperatures were a low of nineteen and a high of twenty-four.
Today, March twenty-ninth, there are still patches of snow here and there, some mounds from plowing, and ice on the lake except for the shorelines and middle. There is snow in the forecast for Friday. However, I have a few snowdrops blooming in my garden. That gives me hope!


Posted by Diane Meade Shapiro at 12:35 PM No comments:

Out and About: Ice-Out, Ice Back, Ducks, Geese, and Eagles

This year the ice went out on Round Lake March first after four days of temperatures in the high sixties. Temperatures dropped below freezing over the first weekend of March so a skim of ice formed back on the water. On Monday, the sixth, I went down to check out the lake. There were a lot of ducks huddling on the ice, some standing on one leg while warming the other under their feathers.  Geese came in for icy landings and did the same. Far across on the south shore, Bald Eagles harassed ducks up into frantic flying flocks.  The eagles swooped after them. Unfortunately they were too far over to get clear photos. In the afternoon I had to go back for more entertainment! A Bald Eagle was sitting on the ice. It flew up to a tree by the inlet, joining a second eagle. They presided over the lake from their perch. Ice was gone by the next day. 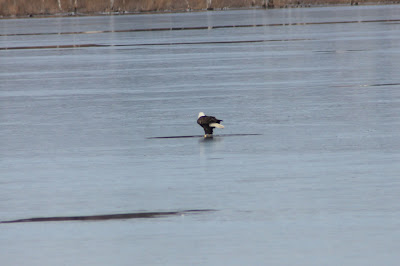 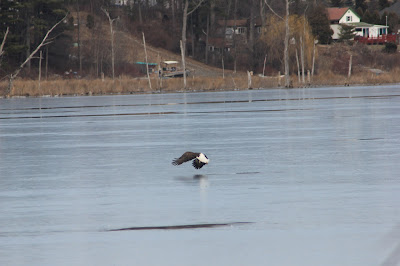 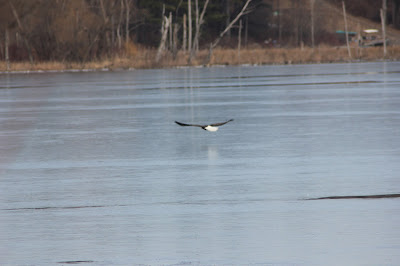 Posted by Diane Meade Shapiro at 3:26 PM No comments:

Out and About: Monarch Butterfly Wings

On February twenty-fourth I got a call from my friend and neighbor, Ali, to come look at Monarch Butterfly wings in her yard. I went right over. They were, indeed, Monarch wings on the ground and not connected. They had been pulled apart by what, I don't know. Maybe a cat? Birds know better than to mess with a bad tasting Monarch. But why was it here at this time of year? Monarchs are still in Mexico. This one must not have made the journey down. Perhaps it was not strong enough or had been attacked and pulled apart in the Fall. It could have been hidden under leaf litter until the snow and ice melted. Very Interesting! Check out some pictures. 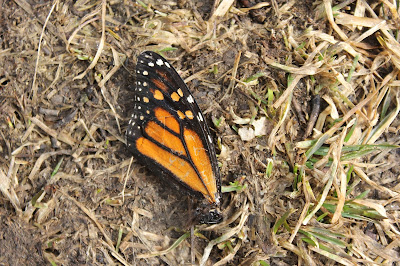 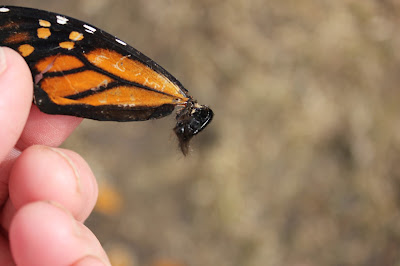 Posted by Diane Meade Shapiro at 4:36 PM No comments:

I have done the GBBC for many years now and like to do it as a hike through the Village of Round Lake. The count gives ornithologists a big picture of which birds are where at this time of year. Anyone can do it. You can count for fifteen minutes, submitting one checklist or all four days and send multiple lists to GBBC.org. It is conducted around the world. While walking my dog everyday, I get to know where certain birds hang out and can walk by their haunts and include them on count days. However, I do need to either see or hear them. There always seems to be one species that doesn't show itself for all four days. This year it was the Pileated Woodpecker. I usually see them on South Lawn excavating a tree for what I'm sure, is a dug-out canoe. I went to the spot a number of times over the count period and no sign of them. Tuesday morning, after the count was over, I heard their call. I did get to report nineteen species for Round Lake by walking around and also by counting the birds at my yard feeders, which is a Project Feeder Watch site. Some of the birds on my checklists were a Northern Flicker, Eastern Bluebird, Hairy and Downy Woodpeckers, American Robins, Red-bellied Woodpeckers and American Tree Sparrows.

I
Posted by Diane Meade Shapiro at 4:12 PM No comments: