Out and About : Round Lake Nature Notes February 2012

In the birding world, FOS stands for first of season.  This acronym is used when one first sees a bird species'  return to an area, usually in spring.  Well, I've been waiting and watching all winter for a "FOS" snowfall.  Just as I was boasting about not having laid a hand on a snow shovel all winter, weather forecasters began predicting a winter storm on February twenty-ninth.  Really?  I would have predicted a good foot of snow on the first day of spring or maybe April Fool's Day.  The last major snow storm was four months ago back in late October.  So shovel or broom?
On February sixth, Norma Spallholz heard and saw a Belted Kingfisher down at the marsh on Goldfoot Road and Route 9.  The next day the two of us walked over there to get another sighting.  The kingfisher is a regular resident in spring through fall but I've never heard or seen one in winter.  As we approached the marsh, I heard his tell-tale rattling cry.  He flew down the stream and up into a tree so we got a good look at him.  Maybe the mild weather has encouraged his winter residency.  With open water at the inlet, outlet, and feeder streams, fishing is possible.  The kingfisher also eats insects and small vertebrates.
I was curious if anyone else in the area had reported a recent sighting.  With a little research, I found that for the first time ever,  two were seen during a Christmas bird count at Five Rivers in Albany.  Only two others were spotted - one at Vischer Ferry and another by the Hudson in Albany.  Apparently a pretty rare sighting, so great job, Norma!  I reported it to Cornell Lab of Ornithology's on-line checklist e-bird.
Kathy Riedel, Norma and I did the Great Backyard Bird Count on February seventeenth, recording eighteen species of birds as we walked around the Village.  In the afternoon, Robin and Elijah N'dolo helped me count birds from the library porch.  Thank you all!  There were a half dozen species that I usually see but unfortunately, didn't show themselves during the count days.  The Bald Eagle was one of them.
Just to let you know- it's 11:30 a.m. February 29, 31 degrees, and it's started snowing.  I'm writing this article and counting birds at my feeders for Project Feeder Watch, a citizen science project through the Cornell Lab of Ornithology.  Still wondering about 4-8 inches.  We'll see...
Wow!  The birds are flocking to my feeders in a feeding frenzy!  As the snow continues to fall, five cardinals are feeding on the ground.  Goldfinches and House Finches are vying with Grackles for space at the three seed feeders.  Five starlings and several Red-winged Blackbirds sail into the yard scaring off the cardinals.  I had a FOS sighting of three red-wings in my yard on February fifteenth.  Last year I didn't see one until the middle of March.  It's hard to write with so much bird activity going on.  Did they listen to a forecast?
It is still snowing when Robin N'dolo joins me at 4 p.m. to help count birds for Project Feeder Watch.  He is delighted to see all the birds at my feeders.  We sit on the porch, binoculars in hand, identifying and counting.   Five cardinal pairs, a Carolina Wren, two Tufted Titmice, a dozen House Finches, all braving the snow to get a last seed to eat before taking shelter for a cold snowy night.  A record number of birds for Robin and a record amount of snow for Leap Day.  When Robin leaves, I put a hand on the shovel.
Posted by Diane Meade Shapiro at 3:28 PM No comments: 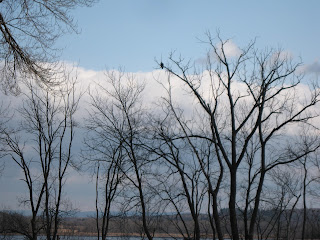 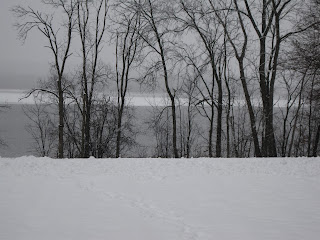 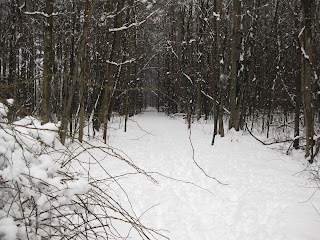 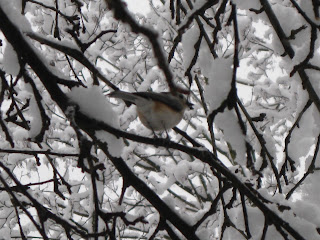 So we finally got a snowfall!  Just as I could see a snowdrop flower begin to open and my daffodils were up about an inch and a half.  No worries though because in a couple of days it will be up close to fifty degrees.  We'll be slogging through mud.  I got out for a couple of walks to take some pictures.  The ice is going out on Round Lake.  We had gusty, high winds over the weekend of February 25-26 which probably helped to break up the ice.  Last year ice out was April sixth.  The first picture is of the Bald Eagle probably waiting for open water.  Then there was snow but the ice is receding!  A walk in the woods at the end of Peck Avenue.  The last picture is of a Tufted Titmouse in my apple tree.  He's cracking open a sunflower seed.
Posted by Diane Meade Shapiro at 3:08 PM No comments: