Posted by Diane Meade Shapiro at 9:07 AM No comments:

After having seen the Bald Eagle in the morning of March twenty-sixth, I decided to do some spring cleaning in the afternoon.  I got out work gloves, fresh cedar shavings, and my camera.  Oh I wasn't cleaning my house but the two Wood Duck boxes I placed last year by the stream on the south side of the village.  Apparently, Wood Ducks like clean shavings each nesting season in order to consider moving in.  I went down to the box that's located at the end of Cleveland Avenue and a little to the east.  I took a picture of the box, adjusted the metal baffle and then opened the side door.  I saw feathers mixed in with the cedar shavings and some fluff that could be from cattails or thistles.  I saw a paper wasp nest in an upper corner.  I took a picture of it and then put on a work glove and scraped it out.  I took off the glove and took another picture of the nest which I had placed on the ground.  I took pictures of the feathers, fluff, and shavings before donning gloves to scoop it all out.  I reached in and grabbed a handful of  old nesting material.  Out of the bottom of the box, from under all the shavings, jumped two mice.  I don't remember if I screamed  but let me tell you, I was VERY surprised.  The mice shot through the opening in the front of the box and one of them came around the back and looked right at me.  I still had the camera around my neck and got a picture!  I found myself apologizing to it.
Wow!  Now what to do?  After a couple of minutes, I decided not to evict the mice.  I would check out the other box and see if there was a surprise inside.  When I got to the box at the end of Peck Avenue, I knocked first before opening the door.  I knocked several times more.  The shavings looked clean but I forced myself to reach in with gloved hands to clean it out.  No surprises.  Spring cleaning accomplished! 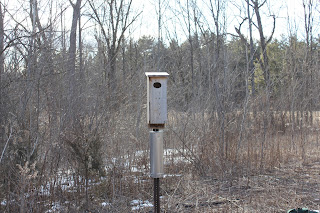 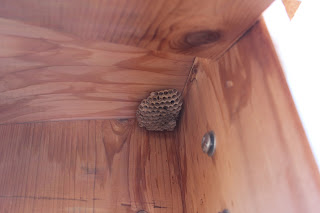 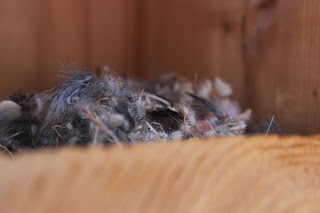 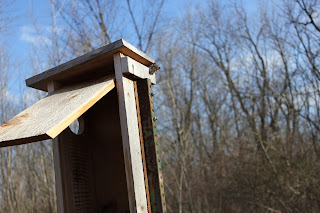 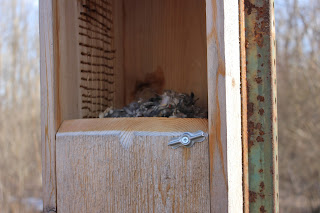