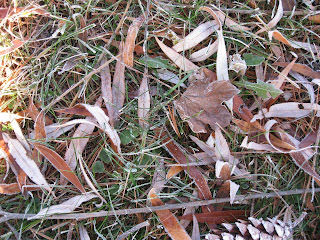 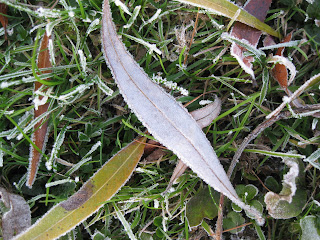 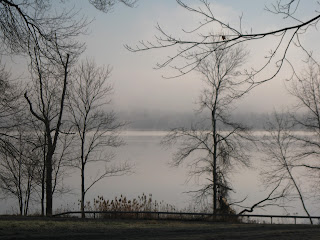 Posted by Diane Meade Shapiro at 3:29 PM No comments:

On Wednesday November 14, the Green Hour Group went on a hike to look for naturally occurring brushpiles.  Last week we made a small brushpile of our own in Schoolhouse Park.  Brushpiles are helpful to wildlife during winter as they provide shelter during cold days and nights as well as, a place to hide from predators.  So we were hiking, running, skipping and hopping along the Zim Smith trail while looking for brushpiles and any signs of wildlife.  At a small stand of pines we stopped to look at holes in a tree made by woodpeckers.  We also saw a large brushpile.  Jessica, one of the moms, pointed out a big pile of pinecones.  The pile was in the woods next to the brushpile.  We didn't think it was made by a person.  As we all took a good look, we also saw a pile of pinecone scales, called a midden.  Earlier that afternoon I had been scolded by a red squirrel in that exact spot while walking my dog.  Was the squirrel responsible for the pinecone cache and the midden of discarded pinecone scales?  Yes it was!  After our hike I looked up the habits of red squirrels and read that this is what they do.  There's been caches of up to 200 pinecones.  Wow are they hungry!  Today I was able to catch a picture of the squirrel as it scurried up the tree, all the while scolding me for interrupting his hoarding.  Thank you Jessica for that great sighting!!
Posted by Diane Meade Shapiro at 5:28 PM No comments: 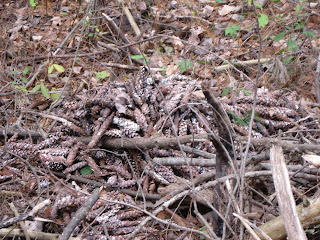 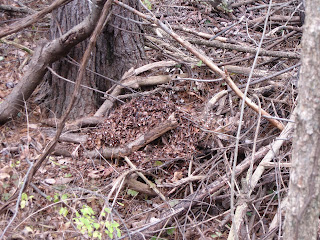 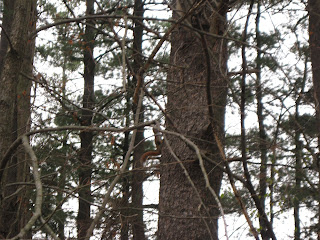 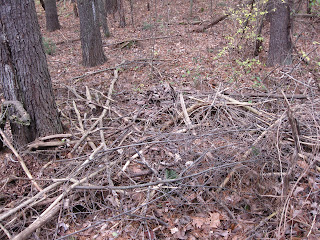 Posted by Diane Meade Shapiro at 4:53 PM No comments:

Children in the Woods 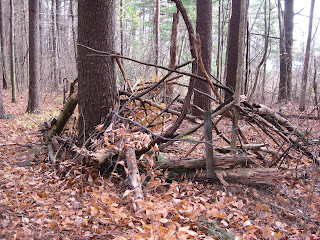 In Round Lake on Sunday October twenty-eighth, it was the calm before the storm.  There was not even a whisper of wind.  It felt eerie outside.  On Monday as we all braced for Hurricane Sandy, the wind picked up.  The Village’s many trees began bending and swaying.  Thankfully,  most trees had already lost either all or a majority of their leaves.  Heavy rain and possibly snow with trees still with lots of leaves makes for downed trees and power lines!  Wind whistled between houses and swirled leaves up and against windows.  Rain held off until late in the day.  Out several times with my dogs, I noticed only tree branches down.  The dogs enjoyed chasing flying leaves and finding new sticks to play with.
In the afternoon I saw on the news that Lake George had large waves crashing onto Million Dollar beach and looked like an ocean.  Before sunset I went down to our lake to check it out and to take some pictures.  Round Lake did have white caps but certainly did not look like the Atlantic.  I would not have chosen to go kayaking at this time however.  The wind whipped the tall  reed  Phragmites on the lake’s shore.  There was not a water bird in sight.  In fact, I don’t recall seeing any flocks of geese flying overhead on Monday.  At least, I didn’t hear their honking which could have been swallowed up by the wind.  Not a single duck was on the water.  The Bald Eagle which I have been seeing several times a week either gliding up in the thermal air currents or perched on a lakeside tree was not to be seen.
As night fell so did some rain.  Wind did not pick up as strongly as forecasted.  Power stayed on through the night and was still on come Tuesday.  As I walked through the woods at the end of Peck Avenue that morning, the stand of towering red and white pines was still upright.  The large maples and oaks in our parks hadn’t toppled.  We had gotten through the storm unscathed.  Unfortunately, we discovered that downstate, NYC, Long Island, New Jersey, and Connecticut had devastating destruction.  My hometown of  Locust Valley, on the North Shore of  Long Island just minutes from the L.I. Sound, did not fare well.  It is a heavily treed area with nature preserves, marshes, swamps and woods.  High winds took down numerous trees making areas unrecognizable.  Bayville, the next town over, sits right on the Sound.  It had terrible flooding and some areas still have no power.
As I dismantle sump hoses and put away flashlights, candles, and a crank radio, I am very thankful we were spared the storm’s wrath but so sad for what others in Sandy’s path are enduring.
On a brighter note, if you are looking for Fall color in your garden and a late source of nectar for bees and butterflies, plant some asters.  A hard frost on October thirteenth killed everything in my garden but the asters.  I had bees on the flowers right up to early November.  Last Fall I remember that my butterfly bush and asters were in bloom at the same time.  Asters won out over the shrub for having more butterflies and bees visiting them.   This is most likely because asters are native to our area whereas the butterfly bush is not.  Native insects generally prefer to take nectar and/ or eat native plants.  Alien plants for some of our local fauna just won’t do.  This Fall the butterfly bush was in bloom long before the asters.  Monarch butterflies used it as a nectar source before their migration to Mexico in September.  Afterwards, the asters began to bloom and  were frequented by bees and Cabbage White butterflies.  A great book on this topic is Bringing Nature Home : How You Can Sustain Wildlife with Native Plants, by Doug Tallamy.  Berkshire Botanical Gardens also offers classes in gardening with native plants.

Posted by Diane Meade Shapiro at 5:20 PM No comments: 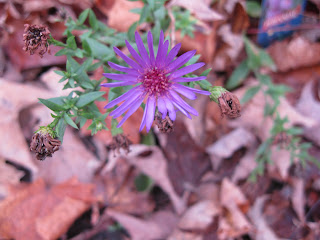 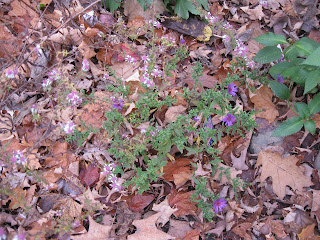 Posted by Diane Meade Shapiro at 5:11 PM No comments: